Ready or not, we boarded a songthaew

and headed for the hills. Our tour group included a 30-something couple from Hong Kong, an Italian businessman and a 60-year-old British couple. For the next two and a half hours we traveled north, then due east. Our guide, Sam, was born to a Lisu tribe. He came down to the city as a young man to make money. He was pretty funny and extremely energetic. A couple large flying insects landed on the British man, and as Sam picked them off, he joked, "You must have something sweet in your pants."

The truck dropped us off at the mouth of a dirt path. We walked single file through the red dirt and dense forest. Dogs barked at us from behind the brush. Cows and water buffalo wandered down the path. "The little known jungle cow," I though to myself. What a strange setting for a cow. After thirty minutes, we reached the first village.

Tucked in a misty valley, this peaceful Lahu village consisted of a group of wooden stilt houses clustered around a water pump. Women and children splashed themselves under the running faucet. Three boys tried to ride the same bike. Puppies sat on the deck of a raised hut. A woman sat in a doorway with her infant. Less than forty people lived in the village, maybe even less than thirty. Our tour group gathered under a metal hut across from the village and broke for lunch. Sam passed out fried rice and pineapple slices. A mother dog with swollen nipples stood in the middle of our group hoping for some scraps. The outline of her ribs poked through her skin. I gave her half of my rice, and she gobbled it up in ten seconds flat. After lunch we passed out some chocolate bars that Sam brought along, and took a few snapshots of the children. The villagers there didn't seem disturbed by our cameras, but all the same, I knew we were intruding. We weren't meant to be a part of that scenery. 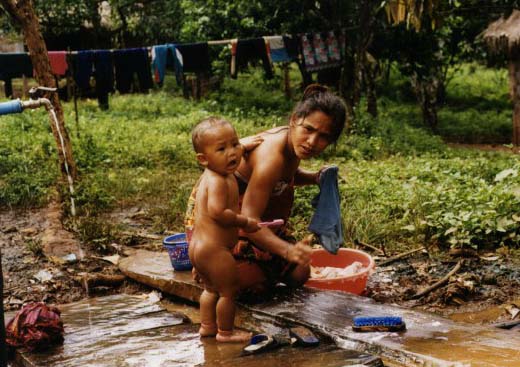 We walked past the village and up a hill threaded with rice plants and wild marijuana. Peter and Mary were spending the night with one of the hilltribes, so they had heavy backpacks strapped on. They were incredible troopers. Over sixty years old, in this humidity, with those awkward packs... and not one complaint. Peter told us that he had trekked through Nepal, so he knew what he was getting into. I, on the other hand, failed to grasp the idea that the hilltribes live in hills. I wiped the sweat off my face, huffed and puffed up the path and hoped to God that it would all be over soon. Exhaustion aside, the scenery was incredible. We passed mango trees and ducked under hanging vines. The enormous forest rolled over hills and into valleys.

After an hour and a half of hiking through the slippery red mud, we reached the second village. The path leveled out as we entered the White Karen village. Women in brightly woven dresses tried to sell us cloth and hats. A toddler sat in a plastic bucket and licked away at a chocolate bar. A woman and two children pounded piles of rice with a catapult-sized wooden contraption. The three of them stood on a lever and heaved it up and down. Another woman sifted through the kernels with a screen. She smiled and graciously posed for photos. Sam, our guide, pointed to the houses and explained that their framework gives clues as to where each tribe originated from. He said that the homes on stilts were built by tribesmen from Burma, while the ones flat on the ground belonged to Chinese hilltribes. 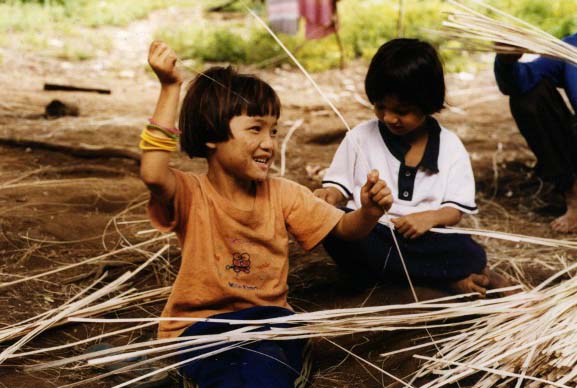 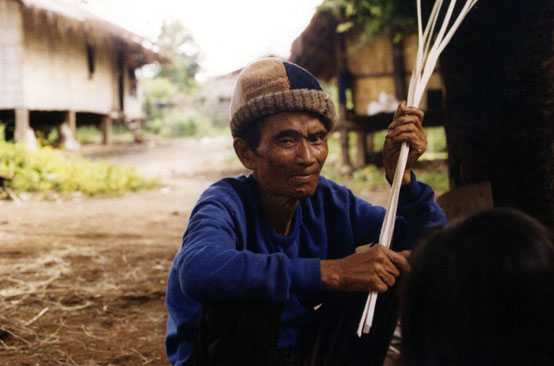 Just outside the Karen village, we met about ten Akha women in full tradition costumes. They wore large, distinctive headpieces covered with metal balls and silver coins. One woman carried a baby on her back. The child wore a similar coin-covered headpiece. She shook her head 'no' anytime one of our group asked if we could take a picture of the baby, so later that day, I tried to draw a picture of her and the child from memory.

The road snaked around a large jagged hill. Vines crawled up the hill and poured down onto the dirt path. On the other side of the mount, we found the Lisu village. An elderly woman with rounded shoulders led a cow down a dirt path. Another woman wove colorful string over a narrow loom. We sat down for a while in the shadow of a Christian mission. An old man offered our group a bunch of fresh bananas. Children ate rice out of crusted bowls. A little girl and two boys chased each other with sticks. The smallest boy put the stick in his mouth and smiled up at me.

Hundreds of tourists must come through these villages each year, and I couldn't help but feel guilty for being part of the parade of picture-snapping foreigners. The hilltribes are terribly discriminated against in Thailand. They are not allowed to go to public schools. They are not considered citizens, so they are robbed of many basic rights and privileges. In town, they are exploited by trekking agencies and turned into caricatures by postcard sellers and doll makers. Just being there, we were adding fuel to the fire. I asked before taking every photograph, but in the grand scheme of things that doesn't make it any better. I still disturbed the natural setting. Of course hilltribe trekking is a huge industry. I was just one of hundreds. And it was great to meet the people and see their homes. Some of the children ate up the attention, and most of the adults were very kind. The tribes do get something out of the whole thing too. Visitors buy their crafts, and I'm sure they get a cut from the trekking agencies, but all the same, there is something inherently wrong with it all. The worn path of sneaker footprints did not belong in this village soil.

The final stop was a Palong village. A woman in a bright red dress held a toddler in a "Pizza Hut Delivery" shirt. Another little boy pressed his lips together, puffed out his cheeks and smiled. We walked out to the main road just as a parade of elephants stormed by. One of them ripped a papaya tree out of the ground, roots and all. Then the elephant positioned it under his right front foot and just tore the tree apart. He ate half of it and left the rest in scattered chunks. The tourist on top of the elephant let out a loud gasp and said simply, "Papaya!" More elephants walked by and picked up the scraps. After the elephants left, a little boy on a tricycle peddled over the remaining slivers of wood. 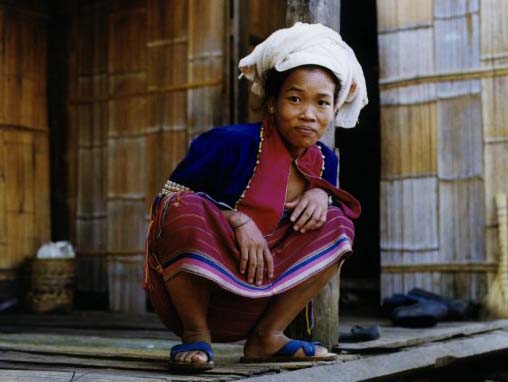 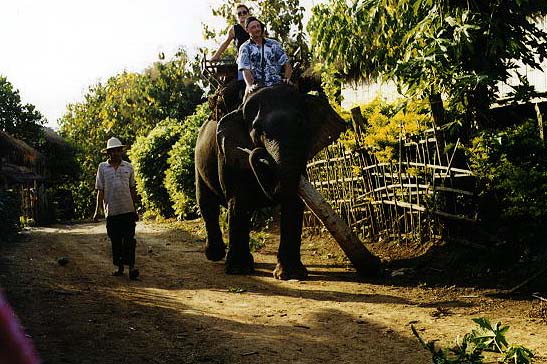 The songthaew picked us up at the edge of the Palong village. Tired and guilt-ridden, I was happy to climb on board and ride back to Chiang Mai.