The Ancient Capital of Siam

Early the next morning we slung our day packs over our shoulders and headed downstairs. Bangkok was just beginning to wake up. Even the stray dogs were still yawning and stretching. Suddenly a rickety gray van huffed down the quiet street and stopped in front of us. We climbed aboard and headed for Ayutthaya, the former capital of Siam. After spending an hour pressed up against other sweaty tourists in the hot and sticky van, we arrived at our first stop -- Bang Pa-In Palace. Located about 20 km downstream from Ayutthaya, the Palace was inspired by Versailles and reminded me of the French and Chinese exhibits at Epcot. The site was constructed in the late 19th century as a summer retreat for King Chulalongkorn.

We were greeted by rows of trees, neo-classical fountains and delicately arched bridges. A pastel pink pavilion sits alongside a pond. Past a garden of sculpted shrubberies, a Chinese-style mansion boasts an elaborate throne. We took off our shoes before climbing the winding staircase of the Ho Withun Thasana (the Sage's Lookout Tower). As tall as a lighthouse and as ornate as a pagoda, the tower looks like it was lifted straight off the cover of a Victorian storybook. One pavilion, the Phra Thinang (Royal Residence) Aisawan Tiphaya-art, rises out of the middle of a pond. Supported by a stilted platform, the pavilion gracefully reaches upwards, climaxing at the point of a single spire. The red, yellow and green tiles look as bright as though they were laid in the day before. It is often regarded as the quintessential example of Rattanakosin architecture.

The perfectly trimmed trees didn't provide much shade, and the sun just glared down on the palace complex. Before long, our guide, a Thai man with a few gray hairs and a pronounced limp, rounded up the group. We loaded back into the van and headed farther north, to what was, for four centuries, the heart of Siam.

In the 13th century, Ayutthaya was the capital of the Thai Empire. In its glory days, this complex was the center of Southeast Asian innovation, art and trade. In 1767, the Burmese army finally broke into the city, burned the libraries, destroyed the wats

and killed the king. The surviving Thai military fled south and founded the new capital near Bangkok. Today the remaining ruins of Ayutthaya are scattered over a large area, so we had to load back into the steamy bus to travel from monument to monument. School children climbed around the weather worn stupas,

poking fun at a middle aged American couple in Bahamas T-shirts. Elephants carrying tourists lumbered by. They are a reminder of the days when armies of elephants walked these roads, past stonemasons and monks, past stupas decorated with gold leaf, past traders and fruit sellers.

We climbed a linga

-shaped stupa, long since stripped of its gold and stucco. We walked around the reclining Buddha near Wat Yai Chai Mongkon. A fresh gold-colored cloth had been draped over the statue from shoulder to ankle. In a nearby temple, our guide chanted a prayer and lit a stick of incense.

A little girl ran up to me and asked if she could take my picture. Andy and I posed for her camera, then she and her friends posed for us. We spoke with them in Thai for a few minutes, learning their ages and names. Actually Andy did 99% of the talking since my Thai vocabulary ranges from "hello" to "thank you." 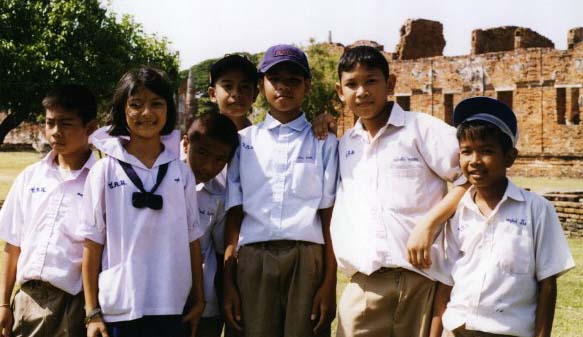 After several more ruins and a couple pints of sweat, our group loaded onto a wooden longboat. It was painted red and green and propelled by a growling motor. Especially compared to the hot minivan, the boat ride was fantastic. Wind ripped across our cheeks. Fishermen along the riverbanks waved as we sped by. All too soon, we found ourselves back on solid ground, but at least it was time for lunch.

The restaurant was a nice, breezy, tourist-oriented joint located next to the river. Our group warmed up to each other there, and soon we all started sharing our travel stories. A loud animated man from Singapore spoke candidly about his adventures in Patpong, Bangkok's red light district. I was curious to hear about the go go bars and prostitutes. His stories were as close as I was going to get to that darker side of Thailand.

We hit a few more sites after lunch, but by this time we were just barely trudging along. I broke from the group at one point to drift through a market filled with pots of soup and piles of fish. In the southern corner of the market, dozens of mobiles tripped and tossed on the wind. A little boy stood below them with his head cocked all the way back. He reached up, trying to touch their hanging streamers with his fingertips.

I joined the group just as an American tourist trip over a "do not walk in the grass" sign. The wooden pole broke in half, and the poor guy quickly shoved what was left of the sign into the dirt and sheepishly crept away.

Finally we headed back to Bangkok, just in time to get stuck in rush hour traffic. Actually "rush" isn't the right word for it. Bangkok has quite possibly the worst traffic in the world, and the miserable ride back took hours.

That night I had trouble sleeping. I was hypersensitive to the lumps in the mattress and the flatness of the pillow. My ears strained to hear footsteps on the concrete stairs. The fan's current was too cold, but then the sheets were too hot. I knew my insomnia had nothing to do with the accommodations. I was so worn out I could have slept on the tiles outside. We were headed for Cambodia in the morning, and the darkness had stirred my fears.