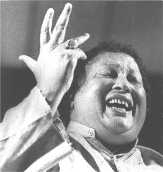 The Spirit of Nusrat Fateh Ali Khan
by Andy Carvin

In 1993, a winter performance at the Gateway Theater in Chicago displayed all the ingredients of a typical rock concert: an endless, almost hypnotizing beat; hundreds of mesmerized individuals slavishly clap to the beat while dozens more dance in the aisles. But unlike a U2 or Pearl Jam show, this was a concert with a higher purpose -- rejoicing in the grace of Allah.

Nusrat Fateh Ali Khan, a name which is neither well-known or well-pronounced by most Americans, is a pinnacle of success in southern Asia and many other parts of the world. Hailed by many as the Pavarotti of Pakistan, Khan is the world's most celebrated qawwal. A qawwal is a specially-trained male vocalist who performs qawwali, a musical expression of devotional poetry practiced by the Sufis. The Sufis, an ancient mystical sect of Islam, achieve spiritual enlightenment through music, much like a Whirling Dervish achieves a higher state of consciousness through dancing.

In performing qawwali, the main vocalist sits with three other vocalists, two of which are playing harmonium pump organs. Behind them sit five other men: four who clap and sing as a chorus, and one who plays the tabla, the traditional drum of the Subcontinent. As the harmonium players begin to solo in the chosen key, the chorus and tabla player keep a steady beat. The qawwal and his other singers then sustain a passionate cry, calling the audience to order. Once the qawwal is ready, he begins the lyrics -- often a praising of Muhammad or a tale of love.

Qawwali is performed in a simple verse-and-chorus format. The qawwal will continue each verse, trading off lines with the other singers. As each verse builds to a climax, they passionately return to the chorus, over and over again, for up to twenty minutes. Words are repeated until they lose meaning, leaving only the music and the spirit behind.

While traditional Qawwal is performed at Sufi shrines and weddings, Khan has brought the style to the West with wild abandon. Though other vocalists may have a stronger voice or greater range, it can be easily argued than Khan has the most passionate voice in the modern musical world.

To be in the presence of Nusrat Fateh Ali Khan is a mystical experience in itself. A short, heavy man, Khan sits on the stage with his party, made up of his younger brother Farukh, his nephew Rahat and half a dozen cousins. Waiting for the right moment to sing, he stares intently at the floor. His eyes close as he slowly gestures his hand in front of him, as if to say "The song is about to begin. Please join me and listen." As the spirit of the music grows, his excitement grows -- ever so slightly. Khan, now swaying his large, majestic torso back and forth, winces while his left hand flails in front of him. The hypnotized audience rests on each syllable of his words. Adoring fans dance to the stage and throw handfuls of dollars over him -- over forty times last Friday alone -- and he does not even acknowledge him. The music is too important to be distracted by several hundred dollars showering from above.

It is no surprise that Khan decided to become a qawwal, for his family has performed traditional Sufi music for over twenty generations. As he explained to me through a translator, "My family has been raising qawwals for over 600 years. I have been trained with it since I was very young. My father, who was also a qawwal, actually would have wanted wanted me to become an engineer or a doctor. Instead, I chose to follow the tradition under the apprenticeship of my father and uncle."

By choosing to follow the Qawwal tradition, Khan commits himself to more than the music -- he commits himself to Sufism itself. His fans praise him like a gift, calling him The Master. He is known throughout the world as Shahen-Shah, the Shining Star. To compare his stature to even the greatest performers in the West would still be an understatement. Yet, he remains a humble servant to God, never allowing his fame to defeat his purpose.

When I went backstage to interview him during the intermission, he was sitting in a chair, surrounded by fans as they knelt on the floor. Not knowing how to act or how to address him, I also knelt before him in awe, looking up at the great Shahen-Shah. Before he addressed me, I turned to one of my translators and asked, "What should I call him?" fearing that there must be a proper term in his native Urdu. A young moustached man smiled and says, "Mr. Khan will do. He is, alas, only a man like you or I."

Suddenly relaxed by this poetic, if not rehearsed response, I introduced myself. Khan, with an overwhelming smile planted on his baby face, shook my hand vigorously and offered me tea. As we conversed through three tag-teaming translators, Khan listened intently to my every word. He tried his best to understand my English -- having recently moved to America as Artist-In-Residence of the University of Washington, Khan used our meeting as a chance to analyze his language skills. While he patiently worked his way through every word, I noticed a small case of lazy eye. As we finished, I am once again offered tea and a small somosa. I had feared an uncomfortable conversation with a saint. I enjoyed a conversation with an old friend instead.

"I cannot allow the fame to go to my head," explains Khan. "Many have said I have compromised my faith by coming to the West. But this is not so. To travel the world and open the hearts of those whose were previously closed is a joy worth the other sacrifices."

To live the life of Nusrat Fateh Ali Khan is by no means simple. In addition to his teaching duties at the University of Washington, Khan performs as often as possible. The Chicago concert, in fact, was literally a last minute affair, planned from start to finish in two weeks alone. The concerts themselves add to the toll; unlike most western concerts, qawwali performance continue until spiritual elevation is achieved. His recent appearance, which started around nine p.m., continued past one in the morning. "The touring is intense, but enlightening," he admits. But the humble Khan refuses to complain: "Qawwal can never be seen as a chore."

Though popular in Europe since the early seventies, Nusrat Fateh Ali Khan has only recently reached the ears of Americans. Much of this new-found success is due to his friendship with Peter Gabriel, who produced his last album, appropriately entitled Shahen-Shah, on Gabriel's Real World label.

"I was first introduced to Peter Gabriel several years ago," remembers Khan. "He had recently heard my voice and asked if we could meet. In 1987, he used my voice on his album Passion and the movie The Last Temptation of Christ in the scene where the Christ was raised unto the cross. Working with Peter is a great joy."

Wrapped within a lifestyle of fanatical fans, never-ending tours and teaching the tradition, Nusrat Fateh Ali Khan lives in a spiritual fast lane, not that unlike an American rock sensation. But for Khan, this is the only way he would have ever wanted. The Sufi credo teaches an ascetic lifestyle, achieving Allah through music and experience. From this life a paradise is born.

"To be a qawwal is more than being a performer, more than being an artist," he notes with a stern, but wise smile. "One must be willing to release one's mind and soul from one's body to achieve ecstasy through music. Qawwali is enlightenment itself."

Enlightenment, indeed, for all who may listen.

Return to the EdWeb home page.