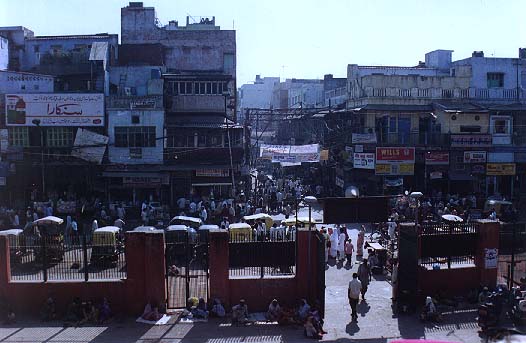 Delhi, India's federal capital, is divided into two distinct cities: New Delhi and Old Delhi. New Delhi, designed 75 years ago by British architect Sir Edwin Lutyens, is a sprawling Edwardian expanse of tree-lined avenues and marble monuments, something like a cross between Washington DC and Nurenberg. Old Delhi, just north of New Delhi, is the centuries-old metropolis that peaked in its grandeur back in the time of the Mughal emperor Shah Jehan (1628-1658). While many of Shah Jehan's monuments still remain, Old Delhi is now mostly a long series of bazaars, tight alleyways, and neighborhoods, strewn with several million residents.

This picture of Old Delhi was taken from the steps of Shah Jehan's Jama Masjid, the Friday Mosque. It's the most spectacular mosque in the city, and it stands as a testament to the years before the Partition of 1947-1948, when millions of Muslim Delhi-wallahs fled north to Pakistan. Though Old Delhi's current population is dominated by hundreds of thousands of Punjabs who came south during Partition, there is still a small, but strong Muslim presence. Notice the billboards at the top left, which still use the Indian/Muslim language of Urdu. Its Persian/Arabic script stands out distinctly from the Devanagari script of Hindi that dominates the rest of the city.